Last week I showed you the pictures, today we are looking under the skirt: I am going to explain how I created my dress: is it historical? Who am I supposed to be? If you dare to read until the end, you will be able to impress even the most blasé of your friends with your intimate knowledge of what Marie Antoinette actually wore to the Revolution. Shall we?

I could write a dozen posts on how I constructed this dress. But I’ll behave, promised. This week, we will talk about the dress itself while next week will be about accessories, hairstyle and makeup. Yes it takes work to transform into a Marquise!

How it all started

We have to go back a few years, when I started my very first dress project using this pattern:

It was to made out of bed sheets. And yes it really was what I had in mind as a “little beginner project” at the time…

Thanks to a fairy godmother (a.k.a my mother in law), I received 5 or 6 yards of curtain-to-be fabric with the most 18th looking style you could wish for. It was perfect but….

… Let’s just say my sewing skills did not match my imagination YET.

This half made dress stayed a good 2 years in a “project half done” state before it got out again. In the meantime, I had improved my knowledge of the era…

Again, I could go on and on describing the different versions of dresses I came across, their good and bad points. The Net is filled with super interesting resources if one looks for it. Yet my wish is not to bore you to death so I will sum up the parts that were the most useful to me. The most curious among you are welcome to go and have a look at wonderful websites such as American Duchess, Temps d’élégance et le Temple des Modes (the last two are franco-english blogs).

The most difficult part was, out of the many options available, to choose just THE ONE that I would design and sew to the end. If you start a time consuming project, might as well be sure that it will be pretty and historically accurate(ish).

I quickly noticed we often hear about “a georgian dress” but it is like saying “a 20th century dress”: very vague. If trends were not as quick to change as our “fast fashion” modern times, styles evolved a lot from one decade to the other. To give you an idea take a look at this:

Source: a russian blog Bloshka with many over time lines like this one. They also have a Facebook Page

When you wish to create an XVIIIth century look, time is not the only factor to take into account. Clothing also depended on your activity (inside, outside, hunting, ball…), the time of the day and your social rank (obviously).

It is my fabric that helped me decide, reminding of the pre-Revolution period. In short, Marie Antoinette’s style gets more and more popular starting 1775 after Louis the 15th’s death. The older she gets, the simpler, more practical clothing becomes. The influence of the Revolution and the idea of the time also tended towards less ostentatious fabrics, less fuller skirts…

My main inspiration: one of Sofia Coppola’s dress from Marie Antoinette. Not that I am crazy about this movie but still, THE COSTUMES….

So who am I supposed to be ? I am closer to a young Bourgeoise than to a Marquise to tell you the truth. At my age (28) I have already 3 or 4 children and I have been married for 10 years.

You would probably not go to Versailles in my outfit (not enough bling) but you could definitely walk around for a nice park stroll in Paris.

Putting the pieces together

Since I now knew the style I wanted, I picked a corresponding pattern (below)

I completely skipped the thick, tiny written explanation guide provided by  JP Ryan. Instead I followed closely the instruction of another blogger (Dentelle et Satin franco-english too). She made the best video detailing construction step by step:

I hand sewed external hems for an invisible finishing touch.

My advise would be to test the fit of your dress WITH your stays on (not the case on the picture but you get the idea). The reason is your shape will change once you have it on (which is heu… kind of the point).

If you want to know more on the topic, read this article from Temps d’élégance. Really useful. It is also ok if you don’t want to play by the historically accurate rules, girls wanna have fun and all that…

Price: Hard to tell because the fabric was a gift but probably around 250$/300$

For the pros among you, what do you think, historical enough?

For the others, are you ready now to make one of your own?

Tell me in the comments!

Subscribe to the blog to get all the articles first,

Feeling chatty? Go have a look at my facebook page:

See you next week! 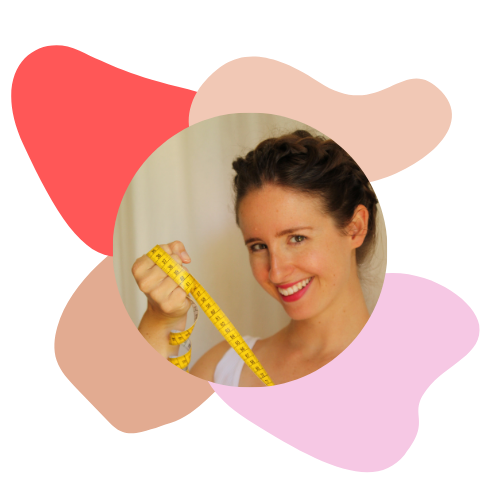 Fashion of yesterday & tomorrow, DIY, wedding, costumes, sewing tips, interview of incredible seamstresses... It is all that and a lot more you will find here. Why ? I wish to inspire, provoc and help you as much as I can...
Tempted ?
follow me !
Alicia
marquiseelectrique@gmail.com
Atelier Marquise